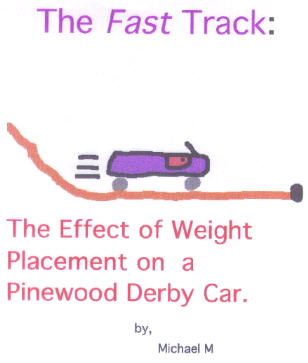 Annually, the Boy Scouts race solid Pinewood cars. This race is called the Pinewood Derby. Each racer needs to design a car that will beat the competition. There are very strict regulations that they must follow, regarding weight, length, and width of the race car. The track is 10m. long and has a slope at the beginning which turns into a flat surface at the end. The problem I was faced with was how to weight a winning race car. Though most people agree that the maximum allowable weight, which is 5 oz. works best, people have lots of different ideas about the best place to add extra weight. After researching Pinewood Derby regulations, laws of gravity, simple machines, and friction I developed my hypothesis. I think that having the weight in the back will give the weight more distance to travel downhill so that it can build up more speed, before the flat section. When the weight runs down the slope, gravity will have more time to influence it. Then when the car hits the flat part, it will have greater inertia.

My first task was to gather materials. They included the following:

I purchased a new Pinewood Derby kit and a stopwatch. Then I took the Pinewood block and with my dad's help, we shaved the front end of the car off. I sanded the rough edges to avoid splinters. After this, I weighed the car and added nickels to the top until it reached about 6 oz. It took fourteen nickels to reach this weight. The car was now ready for adding holes to carry the weights. My dad drilled 3 large holes, one over each axle and the other hole in the center. The front and rear holes were the same size and large enough to hold fourteen nickels. The middle hole was added just in case we needed it to work the experiment. I weighed the car again and, with the nickels, it was just under 5 oz. which is the Pinewood Derby weight limit. Next, I added the wheels and axles. I aligned the wheels as well as possible and I glued them into place to avoid inconsistency. I added graphite to reduce friction. Finally, my car was ready to race.

We borrowed the actual Pinewood Derby racing track from Pack 1364 and set it up in our basement. My dad and I discussed our racing plan. He would release the car when I signaled him by counting 1.2.3 GO! On go, I would start the stopwatch, and stop it the moment the car reached the finish Iine. We practiced a lot to get more accurate at timing. To make sure that we would get good average timings, we decided to race each weight category 11 times.

We started the actual races by placing fourteen nickels in the front hole and securing them with a rubber band. I ran the car down one track, timed it with a stopwatch and recorded it's speed and weight combination. We repeated the race. Then, I moved one nickel to the rear hole and ran the car down the same track. I timed, recorded, and repeated the race again. I continued to move the nickels one by one to the back hole, racing each weight combination twice until all the nickels were in the rear hole. I repeated the entire race procedure until 11 races had been run and recorded for each weight combination. (A total of 165 races were run.)

front = f = nickels on front hole of the car

difference = the difference between the fastest and slowest times

My hypothesis was partly correct. There is a general trend. The car goes faster as more weight is placed in the back. This can be seen by the [black] line on the graph which shows the 5 weight combinations with the least difference between the slowest and the fastest times.

I was a little confused by my first graphed results. The results really bounced up and down. I decided to contact one of my online resources. This started two weeks of back and forth E-mailing. Stan Pope was my E-mail consultant. He has a written paper that is on the internet about the physics involved in Pinewood Derby racing. He has designed a winning race car that many kids have done well with. He gave me questions that led me to some answers. With his questions, I realized what may have caused the inconsistencies on the graph. Probably the variable that changed the speed most was the difference between the front and the back wheel alignment, since the back was a little crooked. The timings were erratic because wheel alignment was slightly off. On some runs the back wheel might have scraped the car, causing friction and slowing down the speed. Another variable was timing, since it was hard to get the gates and the stopwatch going at exactly the same time. Another variable was the starting point on the racing track. It wasn't always exactly the same. These probably made some of the results faster or slower than they should be.

When I finished the graph, I saw a general trend that supported my hypothesis. In general, weight in the back is better than weight in the front. Since the results were inconsistent, however, I think it would be a good idea to do this experiment over. Here are some things that could be done to reduce the variables. Check the wheel alignment carefully by running the car along a straight line on a flat surface to see if it stays close to the line; use a sensor timer instead of a stopwatch; push the car clear to the left or right of the track before beginning each race so it starts in the same position.

I hope that scouts might be able to put this information to good use in their future Pinewood Derby racing cars. My advice to them would be, "put the weight in the rear area of the car and contact Mr. Pope if you wish to carry out further experimentation."

I would like to give a special thanks to my Mom and Dad for helping me create the car and helping me put up the track, Mrs. Wills for helping me organize the report, Mr. Pope for giving me lots of questions to help me understand, and Pack 1364's Leader, Mark Boyd, for allowing me to borrow their Pinewood Derby track.

Michael M. is a new boy scout in troop 1369 in Virginia. He's in the fifth grade and is eleven years old. He bridged from cub scouts to boy scouts in March. He has been with the cub scouts for four years. Some of his best scouting memories include: the Arrow of light ceremony, camping trips, earning badges, and the Pinewood Derby races.

Michael is also an accomplished cellist. He has been playing for eight years. He has recently been chosen for the S.A.A. National Orchestra in Chicago, Illinois.

Michael's enjoyment of the Pinewood Derby racing cars lead him to ask the question - How does the weight distribution affect the Pinewood Derby car's speed? He spent many hours researching gravity, inertia, and friction. Then, He began his project.