Seen from a distance, the water in a beaker appears to be motionless, but this is an illusion. Aided by sufficient magnification, one would see that each molecule of water enjoys a motion which is unceasing and without apparent order.

The exact history of this observation is murky. A revolutionary microscope design enabled Antony van Leeuwenhoek (1632--1723) to observe the apparently random motion of micro-organisms, which he dubbed ``animalcules''. Such motion is {\it biological\/} in cause. Credit for noticing that all sufficiently tiny particles---animal, vegetable, mineral---will enjoy a disordered movement of {\it physical\/} origin is usually given to the Scottish botanist Robert Brown (1773--1858). Brown's 1827 observations began with particles contained in pollen grains suspended in water, followed soon by ``every mineral which I could reduce to a powder'', including arsenic and ``a fragment of the Sphinx''. In every case, his ``active'' particles showed a ceaseless and erratic movement, later termed Brownian motion. 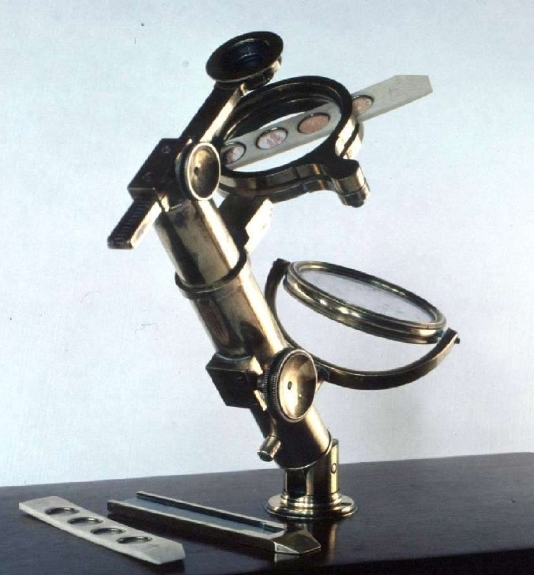 Brown's microscope, in the possession of the Linnean Society. Courtesy of Brian J.\ Ford, whose advice on the history is acknowledged.

Brown could hardly have anticipated the fact that Brownian motion now occupies a central position in mathematics and its applications. Viewed as a mathematical subject, it has extraordinary intrinsic beauty, and is pivotal for many models in areas as widely spread as physics, finance, and statistics. Brownian motion is implicated in most situations involving the aggregate of a large number of random effects, and an evolution in time.

The experimentalists were followed by the theoretical physicists, and then the mathematicians. A physical theory of Brownian motion was advanced by Einstein in 1905. He established amongst other things a formula for the rate of diffusion in terms of physical constants, a result which enabled Perrin to calculate Avogadro's number from Brownian experiments, and which aided Perrin's Nobel prize in 1926. The major defect in Einstein's theory lay in the problem of defining the velocity of a diffusing particle.

Brownian motion is at the heart of modern probability theory. It is the keystone of the theory of diffusion, and it arises naturally in a multitude of other settings. A major thrust of the last fifty years has been to understand how to solve differential equations containing terms which are random. For example, a general diffusion equation takes the form $dX=\mu \,dt + \sigma\, dB$, where $\mu$ is the drift of the process $X$, $\sigma$ is a volatility, and $B$ is a Brownian motion. Just what is meant by such a stochastic differential equation, and how one may study its solution, fall within the modern domain of {\it stochastic calculus\/}, an area which combines the tendency of pure mathematicians towards deep abstraction with the driving need of applied mathematicians and engineers to describe the behaviour of practical systems.

A Nobel prize of greater contemporary note than Perrin's was that awarded in 1997 to Scholes and Merton for their mathematics of finance. The idea of using Brownian motion in a financial model may be found in the 1900 thesis of Louis Bachelier entitled {\it Th\'eorie de la Sp\'eculation\/}. Bachelier's work was discounted at the time, but has attracted a great deal of attention since. A more satisfactory model than Bachelier's is `geometric Brownian motion'---the logarithm of the market price, rather than the price itself, follows a Brownian motion---and this is the modelling assumption made by Black and Scholes in their no-arbitrage computation of the value of a European call option. Finance is now a major application of mathematics. Although the associated mathematics is rich and beautiful, it has proved an error to adhere over rigidly to strategies based on mathematical facts.

We turn now to current research. Astonishing progress has been made in recent months on the physical question of `universality' in two dimensions. In brief, physicists have made remarkable predictions concerning exact calculations involving phase transitions, and it has been a mathematical challenge of the first order to verify these. Recent mathematical progress threatens to lift the veil in two dimensions, where special methods related to so-called `conformality' are valid. Only one peripheral illustration is included here, namely the problem of the frontier of two-dimensional Brownian motion. Suppose, as in the figure, we run a Brownian motion up to some fixed time. We see a shape, containing holes, whose frontier is rough. Indeed, the frontier is so jagged that it is not really a simple line, but has a dimension lying between one and two. It has been a famous conjecture of Benoit Mandelbrot that the dimension of the frontier is ${4\over 3}$. This has been proved recently, as part of an extensive programme which promises to explain a panoply of mysterious (for mathematicians) predictions about physical models in the plane. 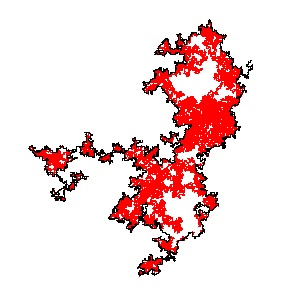 The frontier of two-dimensional Brownian motion. Courtesy of Oded Schramm.

to return to GRG's home page.