About the BBC Blog

About the BBC Blog

Read more about these links. 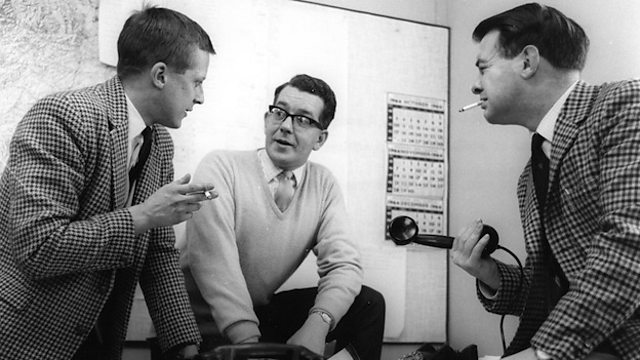 I used to think there was a golden rule about jobs. When you move on, never go back. But that's the thing about rules: Sometimes they have to be broken, especially when an opportunity like this comes up - to present Week In Week Out. It's my second stint … 20 years after doing it the first time, and it’s been a pleasure.

WIWO as we affectionately call it, is a broadcasting institution. Fifty years old this week it is one of the longest running current affairs programmes on British TV. It is certainly the oldest and one of the most respected in Wales.

Looking back, when I joined in 1992 it was well established and renowned for its investigations and dogged pursuit of the truth. Uncomfortable facts for some. But that’s always been our mission. Vincent Kane, Bob Humphrys and Phil Parry were predecessors who sharpened their pen and their skill as great interviewers to sometimes devastating effect. Big shoes to fill, those.

WIWO has always drawn on the best journalistic talent in Wales. There have been scores of awards. And within the business, its producers, (who do not receive the public acclaim they deserve), have often gone on to climb other TV summits.

Before my time, and when it was born, Week In Week Out was originally a live programme with inserts satirising the politics and issues of the day. A sort of Welsh That Was the Week That Was. But it quickly evolved into the programme it still is today.

Over the years, WIWO has distinguished itself with investigations into miscarriages of justice. The Cardiff Three, The Darvell Brothers from Swansea and the inquiry into the Cardiff Newsagent Three raised important questions that were asked again at the Court of Appeal. The evidence we gathered contributed in some measure to innocent men walking free.

The case I remember most clearly was one of the most controversial: Our inquiry into the conviction of Eddie Browning. He was nightclub doorman from the Rhondda who was found guilty of the murder of Marie Wilkes, a pregnant woman whose car had broken down on the M50 motorway. In 1988, before mobile phones, Marie had walked to an emergency telephone on the roadside to ask for help. The Police operator who answered asked her if there was anyone he could phone on her behalf to tell them why she was late. He put her on hold while he made the call. It took a minute or two. When he tried to speak to her again there was no response. In that short time Marie Wilkes was abducted and murdered. Her body was dumped on the motorway embankment a few miles up the road.

I covered Eddie Browning's trial. The evidence was circumstantial, but it convinced the jury. I reported the trial and their verdict. He was demonised and despised, which I and others reported.

Some years later, when I joined Week In Week Out, we received a letter from Eddie Browning, written to us from his cell. He had heard about our investigation into the Cardiff Three who were wrongly convicted of the murder of a prostitute, Lynette White. (The ramifications of that case still rumble on and remain unresolved.)

Eddie Browning asked us to look at the facts of his case. It wasn't one that I relished at the time. I, like many other journalists who reported the original murder, thought we knew better. But look at the facts we did and we were surprised by what we found. Testing the case against him our inquiry lasted several months. Questioning the timings of the events and forensic evidence. Our conclusion was there were doubts; important and worrying doubts. We were not alone. Other journalists - notably the late Paul Foot of the Daily Mirror and Tom Mangold of Panorama - had doubts too. Soon the noise became a clamour and we found ourselves back at the highest court in the land. Lord Chief Justice Taylor agreed that there were significant doubts and Eddie Browning's conviction was, he said, unsafe. It is a moment I will always remember – the intensity of the silence of the public gallery anticipating the final verdict. He was free to go. Uproar followed, unforgettable scenes, pandemonium in the Strand.

Social justice sits at the heart of what WIWO is about. For my first stint back in the Nineties we looked at the impact of poverty on health, domestic violence, drug abuse and prostitution. We also looked at the organisation of Neo Nazi support in Wales. That’s one I won’t ever forget. It led to one of the longest ‘door steps’ I have ever been involved with. In the trade a ‘door step’ is part of the final act, the denouement, and the moment we catch up with a subject of our story, (sometimes a politician or the subject of an investigation) who has been trying to avoid answering our questions. We felt it was very much in the public interest to ask the young man in this case why he was spreading a message of hate and fear. So we waited to talk to him as he left home to walk to work. It proved to be a very long walk indeed. We kept talking, filming and walking... for a mile and a half. In the end, after throwing a couple of punches – that missed me and the cameraman – he decided to walk into Cardiff Police station to avoid us. No questions answered, but the point was made.

Among the other topics we covered in those days that still resonate today are euthanasia, the battle to preserve the welsh language and how so-called ‘show piece housing’ that was built in the Sixties had become little more than the slums they were built to replace.

It is the sheer hardship that many people face, and the dignity with which they describe their situation that has often amazed me. More often than not with courtesy and acceptance of delicate and sensitive questions. There have been many tears.

In many cases people turn to us because no one else is listening.

Twenty years on, WIWO is still asking awkward questions. It is a vital part of a free society. The contribution to public debate - scrutinising the decision-makers and those in power. That was the mission 20 years ago and I am pleased to say it still is today.

Some of our team have dedicated their careers to WIWO. They have shaken the establishment in the years since I worked with them last... most notably with two investigations into the improper selling of University of Wales degrees by colleges of dubious repute. And since I joined them again two years ago we have looked at the recruitment of young men from Cardiff to the ranks of jihadists in Syria; concerns about failings in our health service; the plight of communities built on flood plains and even, most recently, a study looking at the long-term effects of concussion on rugby players. It’s a mixed bag. And that’s the appeal.

One day, I hope when people look back at our time, they will find that Week In Week Out had it right. Reflecting the society we live in and the issues that lie behind the headlines. As a journalist and a presenter that’s an opportunity too good to miss. It’s true of all of us here.

Read more about these links.

This entry is now closed for comments.

This blog explains what the BBC does and how it works. We link to some other blogs and online spaces inside and outside the corporation. The blog is edited by Jon Jacob.

Stay updated with the latest posts from the blog

External links about the BBC

Blogs from across the BBC

Selected by the About the BBC Blog team.

Reopening the doors Inside No. 9 (Writersroom)