The Man who Writes Sci-non-fi.
by Bob Orr

Brian J Ford is a scientist and author. He writes books, articles for academic and other journals, and has given talks to practising and would-be writers. He has written thirty science books, which have been published in over 100 editions around the world. These include the award-winning Images of Science, his pioneering First Encyclopaedia of Science, and the influential book BSE: The Facts. Brian is regular contributor to Encyclopaedia Britannica and has advised the Guinness Book of Records. Full details of his publications are shown on his website.

He was the first British President of the European Union of Science Journalists' Associations in Brussels and Chairman of the Technical and Scientific Committee at the Society of Authors. He is widely reviewed as a 'sparkling speaker' and a 'rare master of the art of getting the message across', and lectures annually in the United States. He travels extensively, gives lectures and chair meetings, and was recently awarded the inaugural August Köhler medal in America. In 2002 Brian was nominated for the Faraday Medal at the Royal Society.

The Times Higher Education Supplement said recently: 'Ford's rules should be painted on the walls of laboratories like the Ten Commandments in a parish church.'

We met when he was lecturing at the Writers Summer School at Swanwick where he told me his thoughts on writing and science: 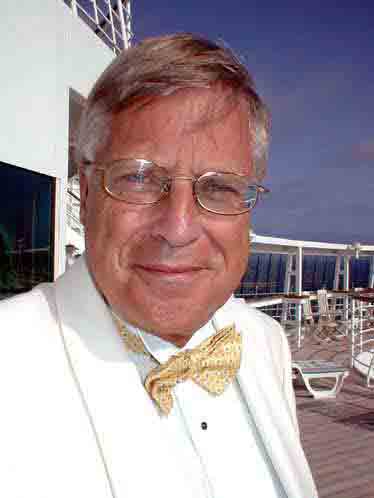 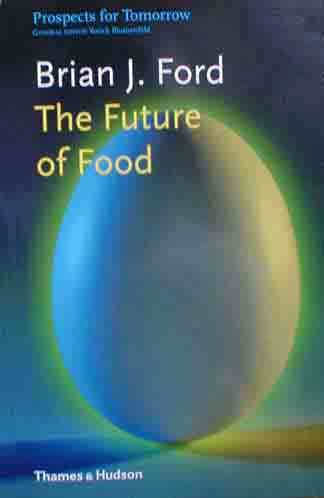 1. Brian J Ford as guest speaker aboard a cruise liner. 2. A cover of Brian's recent book.

"It started when I was a teenager at University. I contacted the editor of a local newspaper and with teenage arrogance told him that 'science is going to be very big over the next few years and what you need is a weekly column.' To my amazement, he commissioned ten columns paying a guinea per column. I had to supply the first five columns on a trial basis. I wrote the pieces, sent then off and waited confidently for a reply within a few days. Of course it didn't come for several weeks. I had almost given up until one day I was in the reference library, reading the paper. I started at the back and read towards the front. Eventually, to my surprise, there on page two was this enormous article with my name on it.

"I felt so embarrassed that I quickly closed the paper. Another shock. There on the front page was blazoned 'Starting this week! A new series of Articles on Science specially commissioned from Brian J Ford'. P align=left>"My first book was a result of researching in East Germany when, in 1969, the Russians rolled into Czechoslovakia. Someone suggested the material would make a good book. I was commissioned by Ballantines of New York and wrote German Secret Weapons -Blueprint for Mars. The book has been in print ever since. Then came a textbook on microbiology. I put the idea to Northwood publishing and they contracted the book. It is still cited to day. I recently had a request from a firm of lawyers in Los Angeles who wanted to quote the book in litigation.

"Now a confession. I have never had any serious ambitions to be a writer and I do not enjoy the process. This is not a boast. I am rather ashamed that I cannot work like a real author, with notes and paragraphs scattered around. I formulate the whole idea in my head then when it is ready get it written in one massive effort. When I am writing, I am unapproachable. I snap at my wife and kick the dog if they interrupt me - or is that the wrong way round?

"I write because there is no other way to get one's ideas across to a lot of people. It becomes a necessary evil. When I write, I write very quickly, for example my book on computers - which I wrote in the seventies - took three and a half days to complete.Some writers are offended if an editor makes suggestions or corrections. I leave editing to the editor. Because something is clear to me does not mean it will be clear to others and the whole purpose of writing is to please the reader and entice their interest.

"Recently I accidentally entered the world of publishing. NESTA, the National Endowment of Science, Technology and the Arts, asked me to produce a full-colour experimental science manual for school kids. They wanted me to write and produce it. So I had to commission the printing and design. Then, following a meeting at Cambridge on GM crops, the organisers thought it would make a book and asked if I could publish it for them. I agreed and registered as a publisher with the right to allocate ISBN numbers.

"Having been an author all my adult life, writing has always seemed a natural task, but publishing is a whole new world. Deciding on the book design and dealing with all the tasks involved is exciting and something which I enjoy enormously. I have wanted to publish a book since I was about fourteen and it has taken me until now to realise that ambition.

"I have always tried to stimulate new philosophies and ways of looking at science. Some years ago there was a belief that science was to hard a subject for primary children. I always thought that nine, ten and eleven year olds were the true scientists. They are interested and fascinated with discovery. It is only as they get older the science gets knocked out of them. I had discussions with a company who produced large colour books and they agreed with my plan. The book was published in all the English speaking countries and sold seventy thousand copies in one month. Since then I am delighted to say almost every bookshop sells science books aimed at the pre-teens.

"So I have had the chance to break new ground. I enjoy interacting with an audience and have a final thought to offer. I think we should teach students facts and results until lunchtime on Fridays, but after lunch we should spend the time discussing the things which we do not yet know. The areas of ignorance are the important ones."

See the web site for space microscope, or to the Sensitive Souls site for intelligence in microbes.

Move to the previous profile on this site: City Boffin to Help Kids or to the next cutting: Making sense of science.