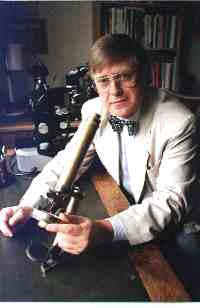 Not only is his latest book, First Encyclopaedia of Science, on the brink of publication, but Brian has also been commissioned by two scientific bodies to write responses to Realising Our Potential, the government white paper on research funding.

There is a great deal of talk in the white paper about research having to provide income for industry, but great discoveries in this country have never come from funded institutions, said Brian, author, lecturer, media presenter and research biologist.

We need to find some way of reproducing the individual spontaneity our great inventors had and foster a climate where people can come up with scientific ideas. He recommends an increase in appointed research scientists who cover all disciplines and can communicate ideas easily to people.

Modern science, believes Brian. has become too remote for people to understand, at a time when they must be convinced more of their money is needed to fund it. In my view, science should have gone the way where people try to explain the world in ways most people can understand. It has become too specialised, too technical.

After breaking into the media back in 1959 with a science column in the South Wales Echo, he rapidly put his philosophy into practice, writing a string of popular works as well as speciatised books, including 1985s The Cult of the Expert.

Brian also presented pioneering Channel Four food programme Food for Thought, and his 1975 Radio Four cancer phone-in special attracted a record 60,000 calls. It is still the only phone-in session ever to be actually repeated by the BBC. In the science world, he is currently about to present research into why plants shed their leaves, and is also examining blood clots to discover why clotting sometimes doesnt function correctly after open-heart surgery.

Move to an earlier profile on the site: ab86mena.htm">Brian J. Ford - macroscopic man, 1986, or the next cutting: Profile: Problem Solver Brian Ford, 1993.