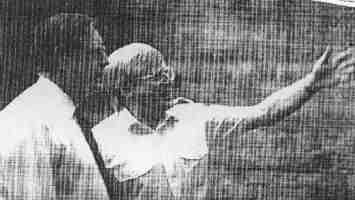 CAMBRIDGE, England - If you are planning a trip to Europe next summer, be sure to include in your itinerary the exhilarating four-day Mensa at Cambridge educational gathering. You'll be housed in historic Magdalene College, where Samuel Pepys' original library building still stands, dine sumptuously in the spectacular candle-lit hall and hear a myriad of mind-expanding lecturers - each world-renowned in his or her field.

For the 1994 gathering, held August 4-8, the topic was techno-tyranny, an exciting look at the battle to keep up with the pace of science. Forty-five Mensans attended the conference, which was chaired by a true renaissance man, a scientist, author, inventor and television personality, the super-dynamic Brian J. Ford. Speakers included writers and educators, and leaders in government and business.

Victor Serebriakoff, the International President of Mensa, was the honoured guest. He conducted a challenging, two-hour "think-in" as the closing event of the program. Mensa at Cambridge began eight years ago when Victor, together with Sir Clive Sinclair, conceived the idea of bringing together Mensans from all over the world to enjoy a celebration of intellect within the hallowed halls of Cambridge University. This year Mensans came from Bermuda, Canada, Australia, America and Germany, as well as from all over England.

The topic for next year's gathering, which will be held August 3-7, will he "The Cutting Edge," with speakers who are involved in current research that will forever change the world. The disciplines will range from psychology to surgery. The total cost is less than you might pay for a good hotel, far less than the cost of any similar management course. And, as a bonus, the magic of Cambridge is free.

Move to the previous profile on this site: Niagara of knowledge in demand, 1994 or to the next cutting: The public need the truth on BSE, 1996.