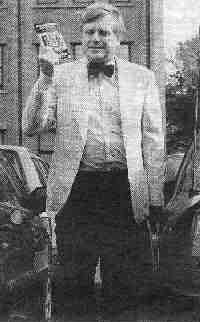 Brian Ford . . . the author of a new book about BSE, called The Facts, says: "For all our scientific knowledge, in this most technological era in history, the public are kept at arm's length from what really goes on."

OF ALL the food safety scares to hit the nation in recent years, the mad cow disease crisis is undoubtedly the worst.
The disease itself is terrifying. It attacks the mind; producing tiny holes in the tissue of the brain.Nobody knows what causes it. No-one has much idea how to stop it. It is fatal.
It has also sparked an unprecedented sense of public fear. Afraid it can be transmitted to humans, millions of people gave up eating beef and the host of products that contain beef. Farmers are facing ruin.
Brian Ford, a Cambridgeshire scientist, has just published a book about mad cow disease, called BSE -- The Facts.
It aims to provide a dispassionate, scientific analysis of the disease itself, of the impact it has had on people's lives, and of the possible measures that can be taken to counteract it.
Mr Ford, who lives at Eastrea in the Fens, is chairman of the national Institute of Biology's history sector, a TV and radio presenter, and science editor of The Guinness Book of Records. He believes that politicians are principally to blame for public confusion about beef.
Scientists have been criticised for not warning people early enough about the disease -- but they did, he says. Scientific reports have been honest and objective, but they have been "misquoted by the authorities". Mr Ford said: "For all our scientific knowledge,in this most technological era in history, the public are kept at arm's length from what really goes on.
"The BSE episode has been shamefully mismanaged, and the Government has deliberately misrepresented facts."

BSE -- bovine spongiform encephalopathy -- was first spotted in 1985, by a vet called to examine a sick cow at a farm in Kent. The animal was unsteady on its feet, hyperactive, and aggressive. Pathologists later established that the symptoms seemed to derive from the unexplained appearance of small gaps inside the brain cells.Theories about the cause of the disease include imported foodstuffs, vaccines, and pesticides, but none has been proved. Nor had there been any firm evidence that mad cow disease has spread to humans, Mr Ford says.

A dozen deaths have occurred in the past two years from Creutzfeldt-Jakob Disease, the human equivalent of BSE. Then, at the end of March, Health Secretary Stephen Dorrell told the House of Commons that the most likely explanation for the deaths was believed to be exposure to BSE before a ban on beef offal had been introduced in 1989.

But Mr Ford says Mr Dorrell also admitted there was no scientific evidence to prove this. "It is as if the Government's advisers were forced into conceding a connection without any evidence to back it up," he says. The upshot is continuing confusion. What does Mr Ford think should be done?

In the debate over cattle culling, the only intelligent answer is a targeted policy eliminating all infected animals, not the slaughter of every single herd, he says. Health and safety checks are also needed at every stage of feed production.

But as a scientist, Mr Ford believes it is vital to redouble research. The number of known cases of CJD to date could, he admits, be the tip of an iceberg. The danger of hiving research off to private enterppse Is that making money becomes the overriding factor, he says. But as well as research into brain disease itself, he also advocates research into why people read as they do to food scares.

So just what are the risks in eating beef? Mr Ford says in his book: "Eating is a risky business. It always has been. "History has been marked by food scares, by fashionable beliefs about diet. The news about beef is only the latest in a long line of panics." He takes a statistical view -- that the chances of contracting CJD are extremely slim.

If those who died of CJD did so because of eating beef, that equates to six deaths a year. "The population of Britain is 58 million, of which roughly half eat beef," Mr Ford says."That means that the chance of contracting the disease from beef is one in five million. "Putting it in context, half the British population, on Saturday, believe they are going to win the National Lottery. In fact, the chance of winning the jackpot is one in 14 million." His advice to people is simple -- if they feel those statistics are unacceptable, they should eat other kinds of meat at present.
He says: "If you are worried about all meat, consider vegetarianism. If you feel supermarkets and chain stores dictate to you, don't shop there. Take control of your decisions."

It is also up to the powers-that-be to make "a paradigm shift away from the philosophy of 'cover up and carry on as normal'." He says: "It is time the authorities realised that the public do not seek reassurance at all, only truth."

Move to the previous profile on this site: Brian J Ford in Mensa at Cambridge, 1994 or to the next cutting: An evening with Brian, Chicago, 1998.