Scientist claims war is in our genes

A WORLD RENOWNED scientist and broadcaster who hails from the Fens has written a book all about genes, genetic engineering and human nature. For years Brian J Ford, of Eastrea, has been known for making complex scientific theories easy to understand. And his sometimes unusual theories have often taken the scientific world in new directions.

Among other theories in the new book - Genes: The Fight For Life - Mr Ford claims that wars such as those in Lebanon, Northern Ireland and Yugoslavia could be caused by our cells. He said: “Over the years there have been a number of theories about human nature - what makes us do the things we do. Socio-biologists say we should look at monkeys and other animals and compare their nature to our own, another theory states that our actions are controlled by our genetic make-up. Some claim the brain controls the whole body, but the fact is that we are made up of trillions of cells, many living separate lives and making individual decisions - and this could be the key to human nature.”

Mr Ford says that civil wars could be like the body’s auto-immune response when we contract a virus the body fights back. Taken to its logical conclusion this means that people fight their neighbours because they want to eradicate them the way body cells want to eradicate similar but different invaders. Mr Ford claims that people could be behaving just like their individual cells. The book also looks at genetic engineering, including modification of food to make it more commercial.

Mr Ford said: “I share people’s concerns about the misuse of genetic engineering, but at the same time we mustn’t let our natural concerns destroy this overwhelming discovery” 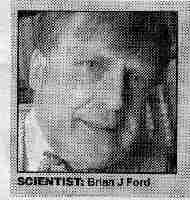 Best thinking on a beach

BRIAN J FORD is science editor for the Guinness Book of Records, a Fellow of the Institute of Biology and a former King’s School pupil. He rose to fame on popular science programmes and his book, released this week, is proving popular with book stores. He said, “I write quickly so the book only took a couple of weeks, but the thinking and research behind it took some time.

“I always do my best thinking on a beach — be it Tonga, the Gulf of Mexico or Hunstanton and Wells-next-the-Sea.” He recently invented a tiny microscope for conducting scientific experiments in space.

See also the GENES AND THE FIGHT FOR LIFE web page; press reviews; or move to the previous profile: An evening with Brian, Chicago, 1998 or the next profile on the site: Brian J Ford - profile 1999.