All Text and Photographs on this site Copyright © 2022 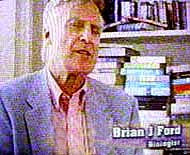 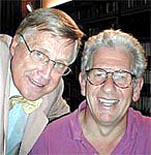 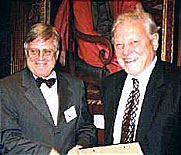 1: Commenting on 'The Great Dictators' on Channel 4 television. 2: Brian and Adam have appeared together for the
BBC on television and radio. 3: Brian presented his long-standing friend David Attenborough with Honorary FIBiol
at the Royal Society. 4: Acceptance speech for the award of Honorary Fellowship of the Royal Microscopical Society.

2023 began with a short series of pilot podcasts recorded with Carol Vorderman and of course Critical Focus,
the regular American column, continues. Publications this year began with an article for Laboratory News, and planned lecture tours include the
French wine country, some unusual Mediterraean islands, also Italy, Portugal, and Spain. Link here to current publications and lectures.

The year began with a contributiuon to the British Medical Journal on evolutionary changes in the coronaviruses.
In Laboratory News Brian published a unique explanation of the size of a coronavirus linked to a video animation zooming
from human hair to virus. He took part in a video podcast on unusual approaches to science, and published a major scholarly paper on past
(and future) future pandemics. He published the opening article on what van Leeuwenhoek saw in the final print edition of InFocus, the
Proceedings of the Royal Microscopical Society. In Laboratory News Brian quantified the use of tree so absorb Britain's excess CO2, with
startling conclusions. New lecture cruises were planned, starting in April, 2022, embracing Miami and Barcelona; Funchal and Rome;
Ibiza and Valencia; Marseilles and Lisbon; Tangier, Cadiz, Gibraltar, and elsewhere.

A new TV documentary on Brian's research into spontaneous human combustion was produced by Japanese TV. Brian
narrated his first audiobook on virus research for an American publisher, and there were reports on his dinosaur theory,
He was elected a Fellow honoris causa of the Linnean Society and gave an extended interview on Nonscience Returns.
Current microscopical research includes marine phtyplankton, blood coagulation and the effectiveness of facemasks.
A growing schedule of lecture cruises was unavoidably cancelled, though the annual "An Evening with Brian" for
Inter/Micro in Chicago took place as usual, this time with a multimedia presentation online on the next pandemic.

Here is a new theory on spontaneous human combustion, the theory on aquatic dinosaurs published in Laboratory News and the documentary 'Future Family' for Channel Five Television. You can link to scientific and general bibliographies, articles and lecture cruises sorted by year. Activities and publications are listed to 2020 and there's a list of web pages that link to this site. Read a Fellowship research. Read about falling exam standards and haematology, the development of the microscope and a full Leeuwenhoerk bibliograohy, research on forensic science, the control of biohazards, behaviour of protozoa, and dissatisfied scientists. There are publications in journals like New Scientist and Nature, and books like Images of Science, and BSE: The Facts, while Genes and the Fight for Life was first reviewed on the web. Pages include GM Crops and Sensitive Souls and the Future of Food in Britain, America, Italy, Spain and Germany. Work on head lice and photomicrography experiments appears with a new space microscope for the European Space Agency. Other research covers water safety and photoremediation, Brownian Movement as Robert Brown saw it in 1828, a major paper on Leeuwenhoek and a new Leeuwenhoek bibliography of 300 items. There's a profile from California and a review from Illinois, even flying saucer photographs.

See personal and press pictures, and world maps with ports of call. The specialised lists include TV programmes from 'Newsnight' to 'Sky News'. An early newspaper column leads to the books index. There's the Soho magazine Boz, columns in the Mensa Magazine in 1972 and 1994-1996. Listed programmes include Round Britain Quiz and Science Now on radio, with Food for Thought (see also 'food' publications index) and Computer Challenge on TV. The original home page from 1996 is still here, with millennium presentations including Science Hour live on LBC.

We link to the BBC April Fool's joke in which Brian, as 'Dr Dieter Zimmermann', introduced the new Euro Anthem to replace 'God Save the Queen'; follow an April Fool's day joke for television, a BBC interview on foot and mouth, and a page on the BBC's Round Britain Quiz. Some lectures are now listed by journal, and the main Index now links to over 4,000 pages and images. To our surprize, this site receives a million hits every quarter, sometimes logging up to 38,000 per day.

Article looking back on fifty years in microcopy for the Royal Microscopical Society.
Column in The Microscope magazine on the fifty years from a USA viewpoint.
After-dinner speech to the Natural Sciences students at Caius College, Cambridge University.
Nature Online reports research on images from the earliest microscopes.
New theory solving the mystery of spontaneous human combustion in Laboratory News.
Article on cell intelligence for New Scientist magazine, (2010).
Chapter for new book on cultured meat published in California (2010).
Paper 'On Intelligence in Cells; the Case for Whole Cell Biology' (2009).
Chapter 'Did Physics Matter to the Pioneers of Microscopy?' (2009.)
Paper on 'The e-learning Imperative' in The Microscope, 2009, 56 (4): 163-172.
Microscopical substantiation of Intelligence in Living Cells, In Focus, Royal Microscopical Society 12: 6-21.
Intelligence in Living Cells, and the Inter Micro Conference, the First 60 Years, The Microscope 56 (2): 67-85 (2008)
Chapters in The Great naturalists, London: Natural History Museum, (2008)
New Chinese edition of SENSITIVE SOULS (2008)
Sir Colin Spedding's new book The Second Mouse gets the Cheese (2005)
New edition of History of The King's School, Peterborough (2005)