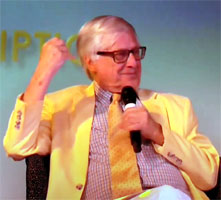 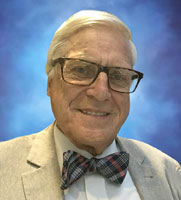 Brian J Ford has had an astonishingly varied career that has greatly benefitted the status of British science around the world, and has introduced important new means of communicating science to the public. He is widely respected and has always given much of his time to voluntary and charitable work. There are informative articles that record Ford's passion for scientific research, including a profile by the University of Leicester, an article by Rebecca Pool and a five-page memoir by an American academic together with recent summaries in connection with his recent awards by the New York Microscopical Society, the Linnean Society of London and the Royal Microscopical Society. Prof. Ford has been devoted to voluntary work since childhood, in addition to becoming an innovative broadcaster and a world-famous writer with books published in over 140 editions. An indication of the remarkable breadth of his work can be gained from the reports from his award of a personal fellowship from NESTA, the National Endowment for Science, Technology and the Arts, where his determination and drive are evident. This absorbing 73-page document should be maximised to full-page. During those three years Brian gave 150 lectures in scores of countries, meeting 10,000 people in over 350 universities around the world. Back in the 1980s he was included in the standard reference works for best-selling authors produced by Gale Publishing of Detroit.

He has often been interviewed for radio and TV, and is currently in demand as interviewee for podcasts online.

Aged 10, he featured in a front page newspaper report, when he was a prizewinner in a poster design competition. His first publication, aged 13, reported the fete he organised that raised money (£35 in today's values) for children's charities. As a world-renowned biologist he revolutionised the profile of the Institute of Biology in London. He founded and voluntarily produced Biology History from 1988 to 1997, and as a member of Council, he persistently campaigned for the Institute to be granted Royal status, a matter recorded in the Institute's definitive history, which he also edited without remuneration. Brian's eagerness to see the Institiute acquire Royal status was supported when it became the Royal Society of Biology.

Brian has often been asked to sort out major problems in a voluntary capacity. At the Society of Authors he was appointed to Council, to chair their nonfiction comittee, reviving it and restoring its membership. Mensa appointed him a Director, so that he could solve their problems. In Cambridgeshire, a commuhity centre project founded during WW2 had failed to get off the ground until Brian agreed to take on this million-pound project. He voluntarily negotiated the site and, facing many obscatles along the way, his single minded determination obtained all the funding for the Eastrea village hall. Brian invited Prince Richard to open the new Eastrea Centre. The trustees surprised Brian with a presentation to commemorate his tenacious pursuit of the project. When he was appointed President of Cambridge Society for the Application of Research, following Sir Sam Edwards FRS, the Society was faced with falling membership and dwindling attendances, but he revived the Society and was acknowledged by their Council with the election as President Emeritus. They said Brian's integrity and enthusiasm had created the CSAR's 'hallmark of academic respectability to the outside world'.

In his early years of journalism he campaigned conscientiously for the conservation of the countryside, of wildlife, and of the urban environment. As a volunteer, he was asked by academic archaeologists to investigate skeletons unearthed in a meadow. Using the latest techniques, Ford was able to show this was a probably a murder victim, and later unearthed the murder weapon. His discoveries and new techniques gave rise to a UNESCO publication which etablished a new approach to investigation. Later he investigated the murder of Freddie Mills, subsequently reported on BBC television, and was quoted in controversies over forensic science and devoted a key article to the subject.

At school he had been an inspiring participant in school plays and set up a successful scientific society. He also began giving lectures to explain science to non-scientists, which has continued throughout his life. He was invited to undertake a world-wide lecture tour by the British Council as a volunteer speaker. In Tasmania, he delivered an authoritative paper on water purification, a summary of which was published, and he was presented with an award by the Premier, Mr Doug Lowe. The response of academic audiences, as in this recent keynote speech in America, is always enthusiastic.

He voluntarily produced a cyclostyled newsletter Dogsthorpe News as a teenager, and has since edited numerous publications, including the groundbreaking Lett's Science Diary (1996-1977), he was editor for Voice of British Industry (1966-1969), and the first colour newspaper (three decades before the Metro), Swansea Colour Weekly (with a personal column on page 6), launched in 1966. Currently he edits and publishes Eastrea Village News as a free service to his community.

In his early twenties he was elected to the local committee of the Workers Educational Association, and devoted himself to organising their lecture programme. When aged only 20, he had launched his pioneering weekly column on science for the popular reader, which helped pay his way as a student, and broke new ground. He began writing for the major newspapers, including The Times, on misapplied scientists and launched the skills gap debate while still in his twenties and has often been written about in these papers ever since. Ford has written regular columns for The Guardian on forweard-looking topics including cars and carbon dioxide, and pollution of the ocean; also for The Listener, where his Langham Diary articles were highly popular. These were regular journalistic contracts, though he was content to contribute an unpaid column to the glossy magazine Boz in London, and also currently he writes a regular American column called Critical Focus which addresses a huge range of current issues from his viewpoint as a research scientist. Like other scientific journals, this does not pay him a fee, though the series is much respected. He drew up legal proposals for the safe handling of viruses, which were reported in the press and widely discussed, then published his proposals in Nature, the world's foremost scientific journal. Ford's law has give risen to biohazard laws around the world.

On a lighter note, he has published cartoons in newspapers and magazines and has published a number of April Fool's jokes on radio, TV and in the press, such as his report of rice grown in the flooded Fens of Cambridgeshire. He quoted Dr Patrick Fields who became world-famous for his method of cultivating rise ... as Paddy Fields, of course. His lectures have always had humourous interludes and he once began a speech at record speed though he lectures at Cambridge University and elsewhere around the world with great authority.

In Nature, without payment, he has written leader articles on topics life cancer research, which was supported by others and he advocated a new approach to microbiology, also in Nature

and in The Microscope journal. One of the major discoveries in the study of the history of science was made by Professor Ford in 1981, when he discovered the original specimens prepared in 1674 by the pioneer of microscopy, Antony van Leeuwenhoek which was published in New Scientist, also in Nature and in many magazines, including Science Digest and Scientific American magazine. It featured in the British Medical Journal. Brian has taught this work at the Department of History and Philosophy of Science at Cambridge university, conducted a residential course at Cambridge University , and has contributed to reference books including Guinness World Records and Encyclopaedia Britannica.

As a charity volunteer, for many years Professor Ford privately arranged the annual pensioner's lunch in his home town, personally maintaining the address list, arranging the menu, then designing and printing the invitation cards, and personally delivering them all. Brian J Ford has been a pioneer of equality and inclusion. His 1980 talk for the BBC called Travel Narrows the Mind which was broadcast on Radio Four emphasised how easily words can offend. He brought Eastrea's first Caribbean residents onto the village hall committee, and also introduced young trustees, aged 10 and under, to help plan young people's activities. The student grants scheme for Eastrea were founded by Ford and have given many marginalised individuals the chance to attend university.

Although he has been handsomely remunerated for his lectures, he rarely charges a fee when asked to speak to varied audiences when there is a chance to show some of the hidden wonders of science. He is a frequent guest speaker on British and American overseas voyages, where he continues to promote science and British achievements with lectures that are greatly admired for their authority, spontenaiety and enthusiasm. He is always on hand to explain local ecology and other cultural topics to travellers. He regularly lectures at international conferences, and was recently appointed an honorary fellow of the Royal Microscopical Society. For his voluntary work with the Linnean Society of London (the world's oldest biological learned society) he has just been made fellow honoris causa. He was recently presented with the prestigious Ernst Abbe silver medal by New York Microscopical Society. Ford has previously been awarded the inaugural August Kohler medal by America's oldest scientific society.

Ford has always been passionate about the popularisation of science and he published influential articles in New Scientist, Medical News and The Listener on this important topic. Brian has had a unique career as a leading broadcaster; his first television appearance was on the same programme that launched the career of Tom Jones (Brian played blues piano), he once stood in as national continuity announcer for BBC Radio 4 in London, and has hosted his own television game show Computer Challenge. David Hatch, when head of Radio Four, invited him to present his own national series Science Now, broadcast at a peak time each Saturday from BBC Broadcasting House in London. His regular series Where Are You Taking Us?, also on Radio Four, looked at ground-breaking topics including noise pollution and menstruation. Brian also presented the first two-hour programmes on science and medicine for BBC Radio Four on topics such as heart attacks, cancer, and alcoholism. His programmes were featured in the BBC Handbook 1975 (pages 37 & 159) and earned him nomination for the Prix Italia.

Brian has published two retrospective articles on his scientific life, one for the UK and another for the USA. Currently he has overseas lectures scheduled through 2025, has two new books in preparation, and as has been stated his work has been recently celebrated by certificates the Cambridge University Society for the Application of Research, the Royal Microscopical Society, the New York Microscopical Society, and the Linnean Society of London, among others. He has currently been contributing (without payment) to the 50 Objects book, writing on science broadcasting, contributing to The European magazine, and providng a foreword for the book Idols of the Mind, published in America.