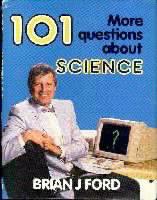 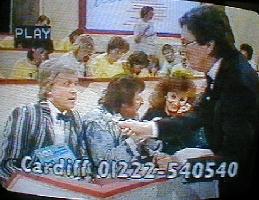 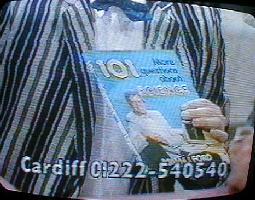 '101 More Questions about Science' on the ITV Telethon

Publisher's information from the rear jacket:

What some reviewers have said about Brian J. Ford:

‘Looking into the scientific future has pitfalls ... unless the writer’s information or imagination is unusually strong. Brian J. Ford shows how it ought to be done.’
Observer

‘Ford offers (his audience) a reasonable balance and the chance to improve their perspective.’
The Times

‘(Ford) is a research scientist who, on television, has so notably shown himself to be one of the rare masters of the art of getting the message across.’
Medical News

The age of the microcomputer is upon us. But there is no
cause for alarm. Brian J. Ford is already hard at work to
get us through it.

Publisher's information from the front flap:

People who don’t like science were captivated by the first 101 Questions about Science. In its successor, every bit as fresh, stimulating and understandable, Brian J. Ford gains more recruits as he answers questions like: Can people really turn grey-haired overnight? Is rhino horn an aphrodisiac? How does a souffle souffle These burning issues are lightened by the author’s look at more everyday concerns, such as marshmallows, lasers, constipation and virgin birth.

Throughout these books Ford’s restless mind and provocative style provide wit and sparkle. But this is a serious campaign to capture the hearts and minds of those who thought themselves lost to science. There is an unobtrusive cross-reference system which links the most unlikely themes, and just at the point in our history where we begin to see science retreating into tinier and tinier specialisms, Ford has come on the scene to make it do the exact opposite. These are scientific ideas come alive. What is more, they are scientific ideas that matter!

Brian J. Ford’s research background is distinguished, and his scientific books have been bestsellers in many countries. He has also appeared on his own BBC programmes, and the Listener has called him ‘an almost perfect presenter, interlocutor and commentator, a model of such things’. Now 101 More Questions About Science, perfect successor to the first 101 Questions, shows how.

Publisher's information from the rear flap:

BRIAN J. FORD has a world-wide following as a research biologist, broadcaster and lecturer. He is a prolific solver of mysteries, and a pioneer of new attitudes in science policy. Not only are his scientific discoveries well known around the world, but his ability to explain complex ideas in simple and direct words is widely respected. His many books include The Cult of the Expert, studies of the development of science and several textbooks, and he has contributed to publications including The Times, New Scientist, Illustrated London News, and many specialist journals. Brian J. Ford lives in Wales with his wife and six children.

Move to the FIRST ENCYCLOPEDIA OF SCIENCE web site,
the 101 QUESTIONS ABOUT SCIENCE site, or to see the reviews index .