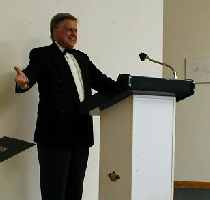 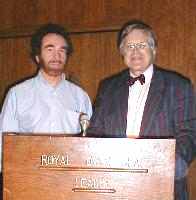 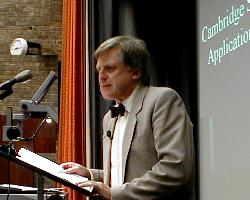 BJF, 1997, The Birth of Crystallography and the Dawn of Duplicity, University of London: Birkbeck College, May.

BJF, 1997, Science, Politics and the Reality of BSE, Sandwich: Pfizer Research Centre, May.

BJF, 1997, Politics and science in the saga of BSE, Italy: University of Verona, June.

BJF, 1997, Leeuwenhoek and the Birth of Biological Microscopy, USA, October.

BJF, 1998, How can we ensure our food is safe? Lecture, Cambridge: Polynous, February.

[McCrone, Walter, 1998, review of BJF presentations at Inter Micro 98, On the Intelligence of Microbes, p228, 'Many of us come to INTER/MICRO meetings with one of our main objectives to find out what Brian has thought of next. He is unique, a scholar, innovative, highly practical in his fields of biology and microscopy, and a super storyteller, making any subject come exciting and alive.' Designing a Laser Microscope for Space, p230, 'It is very apparent that the European Space Agency went to the right man for their new space scope.' Robert Hooke's Micrographia, p240, '... the opportunity to see and hear the masters of microscopy discourse and demonstrate their particular skills.' The Microscope, 46 (4): 228, 230, 240].

BJF, 1998, How the Microscope was Born, London: Royal Institution, December.

BJF, 1998, Chairman's introduction for Lady Mary Archer lecture Capturing the Energy of the Sun, Cambridge: Society for the Application of Research, March.

BJF, 1999, Vote of thanks for Dr John Cummings lecture Feeding the microbes in the Intestine, Cambridge Society for the Application of Research, 2030h, 25 January.

BJF, 1999, The past and the future of genetic modification, lecture to Mensa at Cambridge, Magdalene College, 1100-1230h, 3 September.

BJF, 2000, Chairmans address to A Century of Genetics conference, London: History Network of the Intitute of Biology, 8 May.

BJF, 2000, Hidden secrets in the Royal Society library, illustrated lecture to Friends of the University Library, Cambridge, 13 May, 1100-1200h.

BJF, 2000, Chairman of Computation and New Materials, lecture by Alan Windle, Society for the Application of Research, Churchill College Cambridge, 2030-2200h, 22 May.

BJF, 2000, The microscope and the birth of bioscience, Cavendish Laboratory seminar, Universitry of Cambridge, 1430-1530h, 27 October.

BJF, 2000, vote of thanks to Thomas Duke lecture on cellular engines, Cambridge Society for the Application of Research, 2030-2200, 27 November.