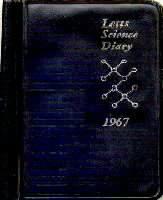 Unless someone is being extraordinarily secretive this is, we think, the first large scale diary for scientists to be produced in Britain. There are diaries for many of the specialities of life, yet the scientific fraternity, more often than not, still jot down appointments and day-to-day notes on the back of an old research schedule or a discarded sheet of data. Not only does this diary offer a more substantial substitute but it contains 128 pages of scientific data. In this way it may serve as a handbook; as a first point of reference for many of the items of information that have slipped the mind and some of the techniques of laboratory practice that may not have been consigned to the memory. Facts, figures and diagrams from the whole spectrum of scientific disciplines have been assembled to provide not only a source of information for the research worker or academician, but also for the scholar, student or writer in the field - and too for the layman who wishes to keep abreast of modern scientific advancement.

The diary has been edited and illustrated by Brian J. Ford, who has published research papers in the very varied journals of astronomy, medicine, technology, microscopy, biology and entomology both in this country and abroad. There are therefore such specialised requirements as tables of taxonomy (pp. 20-37) and analytical schemes (pp. 82-97), normal values (pp. 44-45) and refractive index data (p. 111). At the same time there are notes that may have a broader appeal, from the Greek alphabet (p. 121) to a handy map of the main surface features of the moon (p. 116). The student and scholar may use the histological staining schemes outlined on p. 50, and the qualitative analysis tables on p. 93; the amateur astronomer may refer to the data on p. 121, and workers in all fields may benefit from the unique glossary of prefixes and suffixes (pp. 53-60) which will assist in the derivation of specialised terminology. It is this interesting feature which may also prove invaluable to writers, journalists and the layman in understanding modem science. Often, of course, scientific terms are abstruse and the introduction to terminology (p. 52) lists some examples of modem expressions (autopsy, anaemia, etc.) which have entered ordinary day-to-day language—and yet which appear to be nonsensical and inadmissible to the “grammar of science”. There is controversial comment on the difference of opinion that still rages between botanists and zoologists over the definition of plants and animals (pp. 27-29) and background information on nuclear science and nuclear reactions (pp. 108-110).

There is much of general, even popular, interest: the so-called ‘’fertility drug’ is put in its systematic place (p. 38), there is a good deal of background insight into the much-publicised ‘voiceprint’ identification system (p. 104) and a useful outline of modern genetic research as it affects-mankind (p. 17). Specially prepared micrographs of chromosomes, and the Denver classification of human chromosomal units, will prove useful to students or writers on the one hand, and genetic research workers on the other (p. 16). Nitrogen, carbon and hydrocarbon cycles are assembled together (pp. 10-12) along with the staining procedures used in the ‘Pap’ cervical smear campaign (p. 51). The classification of animal organisms (p. 31) even allows us to find mankind firmly put into his place (p. 37) as “a freak offshoot of tree-dwelling . . . animals”.

We feel confident that the Letts Science Diary is a valuable addition to the reference literature of science; and it is hoped that it may provide a useful symposium of data that may help to bridge some of the gaps between specialities - and indeed between science as a whole and the people it affects.

The information (detailed in the index on pp. 3-6) is grouped under the following main headings:

Editor’s note:
In a venture of this sort there are, perforce, later changes and annual additions to be made. Comments and suggestions from users of the diary, and its handbook section, will be welcomed. Up-to-date information and new material, as space and the demand permit, will be included each year, so the diary will remain topical and as comprehensive as possible in these rapidly changing fields.