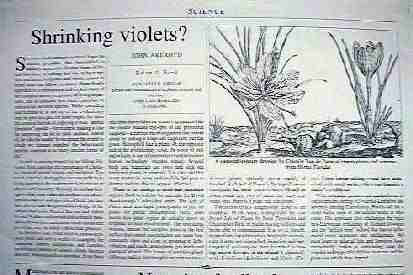 SENSITIVE SOULS, senses and communication in plants, animals and microbes.

Sensitive Souls attempts to break down the ancient prejudice that humankind is innately superior to all other forms of life, and that there is nothing that we, or by extension machines, computers and robots, cannot do better than our fellow creatures. Brian Ford's approach is to demonstrate and explain many of the complex sensory responses of living organisms, and to illustrate how these contribute to interactions between species. While conceding that humans sit at the top of the evolutionary tree, he puts in a plea for more respect for other life, even at the risk of implying a mild "animal liberation" agenda - for example making a case for improving the lot of farm animals. Above all, he asks the reader "to recognize the extent to which we humans manifest the behavioural patterns common to so many ancient forms of life".

As well as arguing respect for our fellow life-forms, Ford considers the importance of a holistic vision of natural history and evolution. Too much of today's biology has become reductionist by aspiring to the mathematical exactitude of physics and chemistry. Not only do modern biologists often work within the confines of a laboratory in a narrow and specialized field, but they tend also to lack the general knowledge of the subject that made Charles Darwin and Alfred Russell Wallace such remarkable scientific naturalists. It was their meticulous observations that paved the way for today's molecular genetics.

In Sensitive Souls, Ford reviews, in non-technical prose and with a wealth of examples, the numerous sensory adaptations and complex behavioural patterns of animals, plants, bacteria and tiny protozoa such as amoebae. Even these microbes have elaborate sensory apparatus, like the minute reddish eye-spot of the protozoan Euglena - a curious microorganism that moves about by lashing a whip-like flagellum, but has green chlorophyll like a plant. At the opposite end of the evolutionary scale, the sonar of bats and whales is one of numerous examples where human technology imitates nature. Several birds and mammals use tools and seek out medicinal plants or minerals. It is clear too that many mammals, even perhaps fish, feel pain or distress and are able to express affection.

Plants at last emerge as more than inanimate objects, food or habitat for animals. Sir David Attenborough's television series The Life of Plants used time-lapse photography to jazz up plants for public consumption. Here, Ford shows how plant organs do actually move in response to their environment. The ubiquitous stomata, minute but complex pores at the leaf surface that control gas exchange and water loss, constantly open and close in response to light, vibration and touch, atmospheric gas levels and chemical stimuli.

The leaves of sensitive plants (Mimosa pudica, for example) and various insectivorous plants certainly move rapidly if touched. Each leaf of Venus's fly-trap (Dionaea muscipula) has three sensitive hairs. Should an insect touch any two of them, the leafy trap snaps shut. Here is a plant that can count!

The author treads dangerously close to the eccentric 1970s view, exemplified by The Secret Life of Plants by Peter Tompkins and Christopher Bird, of plants having feelings and being able to communicate. It is good, though, to see plants take their place beside the animals, even if some are misspelled:Impatiens noli-me-tangere (I. noli-tangere, here described as having mauve flowers, ie the related I. glandulifera),Echallium (Ecballium) and Cystis (Cistus). Some keener editing would have eliminated such small errors, which can diminish a reader's confidence.

With molecular genetics and market forces in the ascendant, seeing off Marxist-Leninism and severely denting Christianity, Ford's call for a more moral view of the natural world is welcome. His approach also challenges the rigid neo-Darwinian orthodoxy of Richard Dawkins and the "selfish gene" school that has so influenced many scientists and intellectuals. We must learn to value all life, and Sensitive Souls undoubtedly makes a convincing case for wonder and respect for fellow creatures and the plants on which they depend.