Stand by for Fireworks 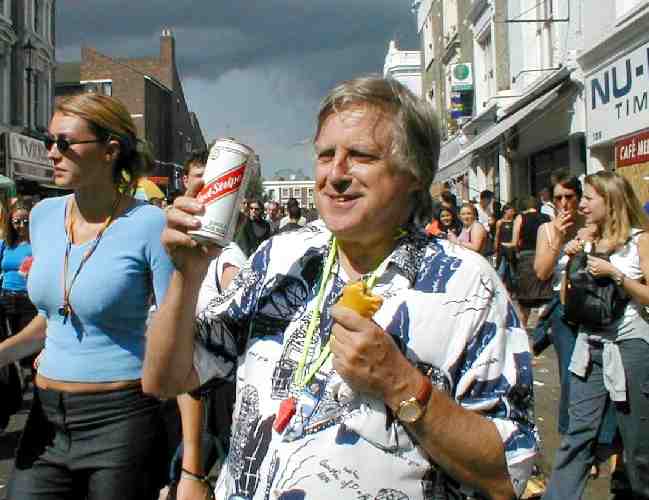 Our author at this year's Notting Hill carnival

The weekend of Guy Fawkes’ Night promises to be full of fireworks. That’s when the sixty days are up when Mr Blair has been told he must cut the tax on petrol. The date is as fixed and embarrassing as a bogey on a bra-strap.

The recent blockades represented a unique unanimity. The tanker drivers agreed with the pickets, and the bosses concurred with the workers; hospital patients felt that their operations would be delayed for a valid reason, for a change, and at least one Olympic athlete said he wasn’t going to run, in sympathy with the protestors back home.

Why? It was half the result of the internet, and the rest was the lesson of the Notting Hill carnival. Mr Blair, when matters were getting serious, announced that instructions had been issued to the oil companies to get matters moving, and that the police had been ordered to make sure nobody impeded the flow of fuel. Matters would start to improve within 24 hours, he stated.

Fat lot he knew. Governments aren’t there to issue instructions to private companies, and the police were powerless. Notting Hill proved that. Whether the carnival police were turning a blind eye to crime is neither here nor there. In reality, there was nothing they could do anyway, when gangs went steaming through crowded streets.

One inspector had his hat knocked off and his cellphone stolen when he tried to intervene in the crowds of Notting Hill. On the slow-moving motorways, a few protesting drivers were apprehended for obstructing the highway, and one or two pickets were nabbed for blocking the gates. But ninety per cent of the public were behind the protests. That’s more than 50 million people, which is rather too many to accommodate in gaol.

The sense of solidarity was one of the most remarkable aspects of the petrol protests, and I put it down to the internet. It has started to give us a feeling of unity. No longer are people remote and unapproachable. You can e-mail your favourite rock star, or have conversations on line with a best-selling novelist.

It’s the web that has given British society its cohesive sense of unity. When people are murdered, or kidnapped, blackmailed or robbed, we all seem to identify. It’s as though it happened in the family. The traditional factions are gone.

Many viewers missed out on some of the best events. Curiously, BBC television news didn’t show the Prime Minister’s car under siege by the crowds in Hull. They had also failed to screen Blair’s booing audience at the Women’s Institute. For a corporation well known for its non-partisan stance, it must be galling to run out of film at riots starring the Prime Minister.

Britain is one of the richest nations, in terms of natural resources. We are floating on huge lakes of oil. Whenever Opec put up their prices, everyone in Whitehall laments the antics of those greedy Arabs, before sneaking off to raise our prices to match. In essence, the careful planning in the Middle East, designed to maximise profits to the oil producers, are copied in Britain to squeeze the maximum profit from the domestic consumer. Competition could bring prices down– but our government prefers slavishly to copy the policies of the Middle East.

Tony Blair, and the other ministers who are allowed to speak, all agree that – if Opec prices go up – there’s nothing we can do. We certainly cannot use taxation as a way of controlling petrol prices, they said.

The government could stabilise petrol prices and claw back an honestly admitted tranche of the public’s hard-earned money, thus allowing us some benefits of being a major oil-producing nation. The price of red diesel (the fuel that is provided tax-free for farmers and ocean-going ships) is about 19p per litre. That’s what fuel really costs. Every penny above that is decided at government level.

So, when the chancellor insists that it’s Opec that has produced the increase in petrol prices, just remember that we the highest prices in Europe – not because of outside forces we cannot resist, but because of decisions taken by the government.

By 5 November the protestors will need to see a response. This is no petty Trade Union squabble (the Unions were opposed to the blockades, remember) but the expression of public outrage. The internet has begun to unite us – and Notting Hill spelled out just how powerless the establishment really is, when enough people act.

At the carnival it was a few dozen mindless thugs that taught us the lesson. Around the oil refineries we saw the will of the general population - fifty million people. We are waiting for action. We won’t go away. And it is us who will be voting next time round.