Here’s a good one. Old Frank was nearing retirement, and was developing a bit of Alzheimer’s. At work they said he should call to see his friend Arthur, who had found an answer to memory lapses. Round at Arthur’s house, Frank confessed, ‘My memory’s going to pieces. I don’t remember anything. Can’t recall what I am supposed to be doing half the time.’

‘Well, I have the answer to that. I went to see this amazing doctor, and he taught me how to get my memory back. He’s a wonderful chap. I can recommend him’

‘How does it work?’ asked Frank. 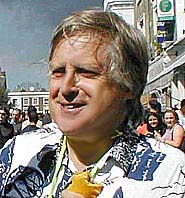 ‘Easy,’ said Arthur. ‘It’s his revolutionary technique for word association. Works a treat. I can remember anything now.’

‘I should make an appointment to see him,’ Frank retorted. ‘What’s his name?’ Arthur shrugged. ‘Can’t remember,’ he confessed.

‘Well, what about the word association?’ said Frank. ‘I though you could use that to remember anything?’

‘You’re right!’ beamed Arthur. ‘Now, what’s the name of that scented flower; the emblem of St George? Thorns all the way up the stems?’

Hah! That’s a giggle, isn’t it? No, not really; not if you are a victim of Alzheimer’s and your mind is ebbing away. They used to tease Mohammed Ali, saying he was going soft in his old age and drank too much. Then it turned out he was suffering from Parkinsonism, oh what a laugh.

There is such a lot of these illnesses about. 10,000 people are diagnosed with Parkinson’s in Britain every year. That’s more than one every hour, day and night. It puts deaths through drunken driving in the shade. One of the most promising avenues of research into treatment involves replacing the patient’s damaged brain cells with new ones. It isn’t perfect, and it’s not a cure, but it does give back dignity, and life.

This is the kind of treatment that stem cell research could offer us. Stem cells are the unspecialised, basic living cells from which all the other types stem – start with a stem cell and you could in theory produce anything from neurons to muscle. You could help people re-grow damaged kidneys, perhaps replace a missing pancreas, give them new bits of brain.

What you do is take a cell from an early embryo, remove its nucleus, and replace it with a nucleus from the patient. Treated correctly, you could grow new tissues to replace those damaged through disease. The world of science is largely convinced that this is a good thing, though the recent vote at the House of Lords looked like a close call for a time. Are they out of touch? Is it naïve to be worrying about the ethics?

I think not. When we mess around with basic biology and human nature there are always fundamental issues to consider. Using an otherwise unwanted embryo for research is something we do need seriously to address, even if there are possible new treatments in the offing. What I find so amazing is the way we become so worked up over some issues, while accepting far bigger problems almost without demur. Abortion is a commonplace matter in today’s Western world. It does involve the removal, and destruction, of developing babies who are often capable of life. Sometimes it’s because of the personal ambitions of the mother. There’s an outcry if you offer euthanasia to the elderly; huge controversy if you use an early embryo for research, yet we can cut maturing babies out and kill them without comment.

I am not opposed to abortion; and I have seen the most fervent opponents change their minds with amazing facility when their daughters are raped by a madman. Yet we do things in society that are far more unnatural than cloning, and which raise huge ethical issues that few people debate. Artificial insemination by donor is one. Donated ova are another. Adoption is a third. A woman bearing a child that grew from a donated egg, is truly not giving birth to her own child at all. That egg-cell doesn’t merely convey the chance of a pregnancy, but brings all its genes from the donor’s family. The donated sperm confers inherent qualities that may be anathema to the recipient, when the child has grown up. Adopted children sometimes grow to have attitudes, or forms of behaviour, that are alien to their adoptive parents. Pretending that the biology of the donated eggs and sperm cells doesn’t matter is blinding ourselves to reality, and in my view raises serious ethical issues.

I believe that we need sets of agreed criteria that apply across the board. Should we exploit embryos? If not, then how can we kill off young babies on a personal whim? Is it harmful to transplant genes from one place to another? If so, how can we accept conception by donor cell without a parallel debate?

New science is now being launched upon us with little comprehension by the public. As Baroness Warnock said in the recent debate, as a supporter of cloning research, the use of a government order is ‘one more undemocratic way of proceeding.’

In the future world, we need to sit down and agree codes of criteria that will govern all our choices. Getting hot under the collar about some issues, whilst we turn our backs on greater problems, is no way to proceed. And issuing government edicts, in the face is limited public understanding, makes a mockery of the freedoms of science.