Am I glad to back from the trials and tribulations of a developing nation. In my experience, those countries all impose the same burdens - the food isn't safe, the railways break down, you can't trust the government, and if they can elect a new one, nothing really changes. The hospitals are over-stressed, many of the public are so poorly educated they cannot read and write, and when the time comes to leave you can never rely on air traffic control. Meanwhile, big business lurks behind every collapsing venture – and the businessmen always lead lavish lives, no matter how poor the country.

So we crunched onto the runway at Heathrow, and headed for the tube where - if we'd been cattle - the RSPCA would have campaigned for our release. At King's Cross we waited for a much-delayed train, a crumbling old set left over from better days, were lucky enough to be jammed in by the toilet, which was blocked, dirty, and overflowing.

There were hundreds of standing passengers, each of whom had paid full fare towards companies that cream off millions of pounds profit every day, yet receive billions of extra subsidy from the taxpayer. We offered up our travel voucher (the original ticket had been confiscated, as the railway staff had printed it out wrong) found that the buffet staff had run out of supplies, and couldn't even get into the First Class compartment because of the crush, and escaped to the relief of polluted city-centre air, glad to be back in civilisation.

Excuse me? Let's sketch in a few background facts here. Britain created public transportation. We invented trains; we had the first jet passenger planes; we pioneered the National Health Service. Britain developed vaccination, discovered the world's first antibiotic, developed the first great suspension bridges, gave radar to the world, and broke records for literacy with education for all. We had the first computers.  And now? Last time we opened a 'revolutionary' bridge it was the 330-metre structure from St Paul's to Tate Modern. Walk on it, and it wobbles. It has already cost £18m, and may cost another £10m before it works. The great Victorian bridges, built to cope with horses, support gigantic juggernauts without a problem.  The NHS tried to install a computer system for London's ambulances, but had to revert to manual operation when it failed. Twenty lives were claimed to have been lost as a result. The reports about air traffic control make it seem like a miracle that there haven 't been more air crashes - and now that's likely to be sold off to private businessmen. The railways depend on Railtrack, who tried to function without an engineer on the board, knew little about railways, and spend their time making their subcontractors cut margins and trim costs. We have had dozens of deaths as a result (and, at the time of writing, there aren't any seats on trains available anyway).

The millennium dome - a remarkable structure in many ways - is filled with mindless junk which nobody could market it properly. New diseases are cropping up in the newspapers every week, and the worst of them all - BSE - has now been suspected in chickens and sheep, and may now be spread round the world. 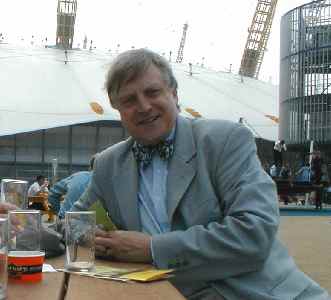 Brian relaxes at the Dome in Greenwich

Odd, isn't it, that parents who let their children stray onto the line in Wales are charged with manslaughter, whilst the directors of the railway companies - who have admitted knowing of the Paddington fault months before the crash - continue to receive their bonuses. The whole of the European Commission was shown to be riddled with fraud, corruption and theft; yet I am waiting to see someone prosecuted for it. The officials I have met in Brussels tell me that most of the suspects are still happily employed in their overpaid posts. A bunch of five businessmen who recycled substandard chicken meat were gaoled in December, though nobody was apparently harmed by their stupidity. I wonder what was the reaction of the hundreds of relatives of the tragic victims of mad cow disease, when they read of Lord Justice Phillips recommending that none of the culpable authorities should be prosecuted?  British people created one of the greatest democracies in the world. Our public works - from sewers and piped water to public transportation and general health - were the envy of the world. Still are. Yet to those of us living here we are hurtling from one disaster to the next.

We have created a high-tech community for tomorrow, yet who has the wisdom to run it any more? Governments aren't up to it. The civil service is too inbred and incompetent. Our universities are run down and bureaucratised. A quarter of the public are claimed to be illiterate. So, to celebrate the New Year (and a new millennium too), let's hope for a new generation with enough balls to tackle these problems anew.