Production and Publication for the Sciences
From a fee-paying school founded by King Henry VIII
to the dawn of the comprehensive era . . . 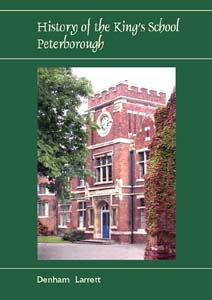 The History of the King's School, Peterborough
by Denham Larrett.

First printed in 1966 for the Old Petriburgians' Association,
and now restored and published in facsimile with a laminated dust-jacket.

To see all books, return to the Rothay House home page.

Contact The King's School Peterborough to order a copy direct,
as the publishers are now out of stock. (publication date October 2005).

Denham Larrett's account begins with the earliest accounts of the pre-reformation school, marks the foundation of King's by Henry VIII, and describes early times when the school nearly shut down (or was close to bankruptcy). He tells of turbulent times when distinguished headmasters felt forced to resign, and moves on to mark the formation of the Old Petriburgians' Association in 1856, the launch of the Petriburgian magazine by a pupil in 1886, and the introduction of forward-looking science education as the twentieth century dawned.

We learn of old buildings in the cathedral precincts, and discover that the move to the present building in 1885 was precipitated by a railway accident. Larrett moves through the years in which King's first became a leading cathedral school, producing scholars who became influential in national affairs. He describes it developing into a leading fee-paying school with a busy boarding-house, reports the impact of two world wars, and concludes with some personal reflections as the comprehensive era was about to begin.

ABOUT THE AUTHOR:
Walter Denham Larrett

Denham Larrett was born in 1900 and was educated at Christ's College, Cambridge and in 1922 he joined the staff of The King's School, Peterborough. He taught mathematics, and was for many years Deputy Headmaster. Larrett wrote a series of well-regarded textbooks on mathematics, his book on algebra in particular having a wide circulation at home and abroad. After the Second World War broke out Larrett set up a War Effort Savings Group at the school. The idea spread rapidly and he was invited to become a member of the school advisory committee of the National Savings Movement. For many years he was an examiner in mathematics for the Cambridge GCE Examination Board. Larrett was subsequently invited to join the Oxford University advisory committee on local examinations and in 1960 was elected Chairman of the Oxford Standing Joint Committee on Examinations.

Denham Larrett was always interested in law and was called to the bar of Gray's Inn in 1926. He taught law to students at Peterborough Technical College. Larrett was appointed Legal Adviser to the Incorporated Association of Assistant Masters, and went on to become Chairman of their Legal Committee, then their Honorary Secretary; in 1963 was elected National Chairman. The following year he was appointed a governor of the new University of East Anglia in Norwich.

He also made crucial contributions to the Old Petriburgians' Association (OPA). By the end of World War 2 the OPA was in abeyance and Larrett was responsible for the re-launch of the Association. For many years he served as Honorary Secretary, during which time membership steadily increased. Larrett's personal knowledge of so many former pupils helped establish a solid relationship between the school and the old boys. Denham Larrett had studied the only existing history of the school, which had been published in 1905, and for many years nursed an ambition to write a new history that would update the story. It was the growing body of support for the idea from the Old Petriburgians' Association that finally resulted in the writing of the work, which was finished in 1965. The OPA were pleased with the result. They had Larrett's manuscript privately printed in 1966. Larrett himself died in 1982.

The original book is now scarce, and the binding was such that some pages had words that were partly hidden. The book has been restored and painstakingly recreated for publication in facsimile. It is a fitting tribute to Denham Larrett's work for The King's School that the OPA has commissioned the formal publication of this important book to mark the 40th anniversary of its first appearance.

All Text and Illustrations Copyright © 2005