This continuing programme of research into the original specimens prepared by Leeuwenhoek
in the 1600s, has revolutionised our understanding of the dawn of experimental biology. A
series of specimens, sent from the Netherlands to London during the 1600's, was discovered
amongst the files of the Royal Society's archives. Microscopical examination shows that they
were as well prepared as many modern specimens. The image of blood cells, for example,
reveals details comparable with the results a modern microscope might reveal. Click here to
see the microscopes; there is also an extensive Leeuwenhoek bibliography on this subject. 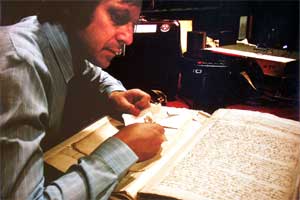 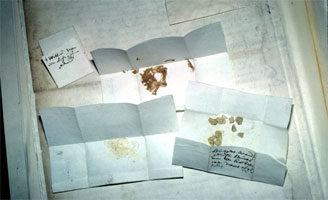 The moment of discovery in the Royal Society's strongroom.

Leeuwenhoek's specimens, intact after over three centuries, were
found still packed with the original letters. Each was stored in a
folded paper packet (right). 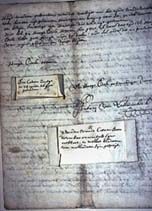 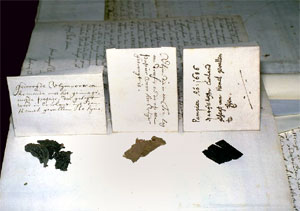 Leeuwenhoek's letters and the specimen packets

(Left) Folded packets containing sections of cotton seeds, safely stored
in paper envelopes, were still attached to one of Leeuwenhek's letters
to the Royal Society.

(Right) Original specimens of algae from the 17th century were found
in their original packets. The three samples of aquatic algae had been
dried to a papery film. The material could be reconstituted and studied.

Move to 'Preparing the Specimens for Examination' or move to LEEUWENHOEK LEGACY web site.