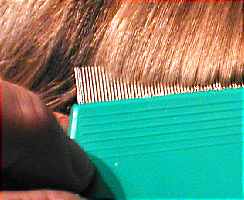 This picture shows an adult head louse (Pediculus) browsing on the blood of a Cardiff schoolgirl. The gut of the louse already contains blood, and there is a nit (egg) wuthin the body, ready to be laid. Note the single hair (diagonally across the upper part of the frame) and the expanding intestinal tract (left). The safest way to remove lice and their eggs (called 'nits') is with the specially designed type of fine comb shown above. Indeed, thorough combing can eliminate head lice without the need for insecticidal shampoo.

During the sixties, I carried out a pilot programme of investigation revealed a resurgence of pediculosis, infestation with head-lice, amongst school-children in South Wales. Many were resistant to conventional insecticidal treatments. The findings were first published as a popular feature (1, 2, 3) and brought some response from readers (4). Later accounts were published in a reference part-work (5), a medical periodical (6), New Scientist (7) and a report in the national press (8). The research has been cited in later papers (for example, see reference 9) and was featured on television.

Click on a picture to go to pages with living head lice.

The adult louse holds onto human hair with specially adapted claws. With its legs, it was reach out and snatch a hair a couple of millimetres away. The claws open and the leg whips round to catch any nearby hair. The the claws close like a pincer, and the louse holds on tightly. Using this technique, a louse can scurry from hair to hair with surprising speed, though it is unable to move effectively on a smooth surface. On a piece of tissue, for example, a louse cannot move far.

Many correspondents ask about treating pediculosis. A school trichologist would really be the best way to find an answer to lice in children; however, although insecticidal shampoos are popular, lice are now resistant to many conventional insecticides. These lotions have a relatively high price (£10 or $19 are examples I have seen) and offer more than they can usually deliver. It is probable that you will spend the money, have a child with a glutionous head for hours, and still end up with lice crawling actively in the morning. I have seen lice crawling activly after the child's head had been dressed with insecticidal lotion all night long. My personal belief is that we can conquer this problem using simpler methods.

I think that the best way to clear of lice the hair is a fine tooth metal nit comb. It drags out the nits (eggs). One method is to comb the hair when it is dry, and comb thoroughly. Keep the comb clean. NOTE: try especially behind the ears. The back of the ear and the head create a warm and moist area favoured by lice. Another method is to wash the hair and then put on lots of conditioner. Do this at bathtime, so it becomes part of having a bath. The conditioner will help to make the hair slippery to the comb. Then comb normally, to line up the hairs, before combing again with the nit comb. This will bring out the adult lice and the nits adhering to hairs. Do this again three or four days later, and again after another three or four days. In fact, using a nit comb every time the hair is washed is the best way (a) to comb hair thoroughly (b) to keep scurf from the scalp and (c) to control head lice.

Close-up of the louse

Someone has asked me abut the use of paraffin, but I hope he meant 'liquid paraffin' (sold for medicinal uses). Using conventional paraffin (kerosene) would be MOST dangerous, as it would make your child's head inflammable - so I must warn most strongly against that, just in case my correspondent's advice is being considered by anyone else.

I believe that combing oil through the hair might prove to be a valuable treatment, and oil is also said to be good for hair - many modern hair treatments rely on oil. Prior to the 1970's an oily dressing, like brilliantine, was popular among smart young men. I think that this may have had an anti-louse action of its own. The oily gel would prevent their breathing or reproducing effectively. In my view, an oily or gel hair dressing would be very suitable for treating pediculosis. The insects would be unable to breathe if an oily environment clogged their breathing pores. If you want to see when people employed hair dressing that I think helped to control lice, the movie GREASE showed it in vogue.

Lice cannot survive without blood (and the fine comb removes them); they cannot breed without time for their eggs to mature (and the comb removes those); and they cannot survive if they are unable to breathe (which oily hair preparations may prevent). At the very least, oily hair stops them moving normally, which may well interfere with feeding. If you use a fine nit comb, then do the combing thoroughly - little children will quite like being groomed, anyway - and always remember to comb behind those ears.